January 08, 2020
Just yesterday, Calvin and I were talking over the questions on a mailer he received from his "Mailbox Club" regarding creation.  We were talking about how God created us from the dust of the earth.  I could tell he was really thinking about this.  It was hard for his little mind to grasp that Adam was formed from dirt, and that when we die, our bodies return to just the same. A few weeks ago, Grandma Marsha was talking about how her and Bruce had gotten arrangements together for their cremation and had even received their urns to collect their ashes.  I remember talking briefly about spreading ashes and asking her when she wanted her spread.  Although I don't remember him being a part of it, Calvin must have overheard the conversation. This morning, random and out of the blue (Calvin style), Calvin says, "Mom!  I want my joy to be spread in lots of places!"  At first I didn't get it.  He was so excited when he said it, like he had had a sudden epiphany.
Post a Comment
Read more

The beginnings of another great school year 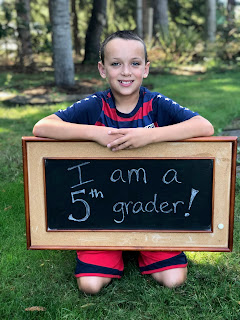 Where.did.summer.go?! And then it was September and these boys were actually excited to head back to school this year.  Makes it a whole lot easier when there's no tears at drop off (o;  Cascade View officially opened the doors on their new building for this school year of which meant William got to enjoy a brand new classroom.  Pretty exciting stuff.  He also originally thought he was going to be with a completely different teacher and due to enrollment, he switched teachers and classrooms.  He's getting to know some 5th grade kids that are new to the school as well as the 4th graders since he's in a 4th/5th blend with Mrs. Cecil. There's a new computer room in the new building and William's looking forward to learning how to officially handle a computer keyboard.  There's also been talk about a Robotics Club this year which has definitely piqued his interest.  Lot's of exciting stuff this year for William! Calvin jumps right into a new classroom withou
Post a Comment
Read more 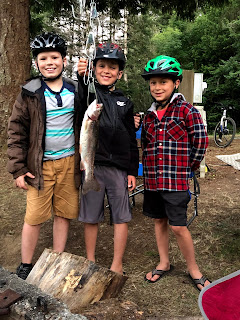 This year for our annual Powers camping trip/Gant Reunion, we rented the cabin on the hill for Grandpa and Grandma and got to camp up there all by ourselves!  It was awesome! Time with family always is.  I enjoy watching all five Gant boys hang out together.  This is Zane's last summer before his senior year, so things will start to change soon.  But Grandpa Terry always seems to make it up after his time at dialysis on Fridays.  He's been a trooper for quite a few years...In the meantime, we'll soak up the memories while we can! These three LOVED taking the fishing poles to the little lake at the campground everyday. Our fave swimming spot just outside of Powers. These two...I am blessed to have the family I do. I've had fun the last few years doing a scavenger hunt for the boys. Gant Family Reunion Picnic Potluck Annual pics at the Wagner House The fish they caught made it home and in their bellies... Well, one belly...Calvi
Post a Comment
Read more 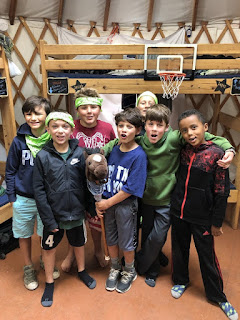 This was William's second and last year at Circle T camp at Tadmor.  He came home last summer begging to go back and this year all he could talk about was Middle School camp next Summer because he could stay longer (stop it...Your mom has to let it sink in that you'll be in 5th grade, let alone 6th!).  He has a love for camping and the outdoors and if you add in friends, he's all over it.  I love seeing him try new things and make new friends.  He is such a great kid that has so much to offer and I just love watching his life being shared with other people.  Here's a picture of him and his cabin mates on the last day before we took him home (o;
Post a Comment
Read more

May 01, 2019
Both boys passed the last level of swim lessons in February and were gifted a free month of swim team so we decided to try it.  Both Curtis an I had our doubts that Calvin had actually fulfilled all of the requirements for the team, but couldn't hurt to try. They both seemed eager as they put on their trunks and we headed out the door.  Once in the door, it was an entirely different story.  The instructor was going to have them get in the pool and perform different swimming techniques to see what they could do.  Calvin started to jump up and follow her until he caught eye of William's hesitancy.  He wasn't going to go without his brother, so he sat back down. There's a bond between these two that truly is something special.  Of course they fight occasionally like all brothers do, but they also gel together in a lot of areas.  Part of what makes parenting them a joy.  Unfortunately, they can also feed off of each other's weaknesses.  Calvin adores and looks up th
Post a Comment
Read more

Calvin get's Student of the Month! 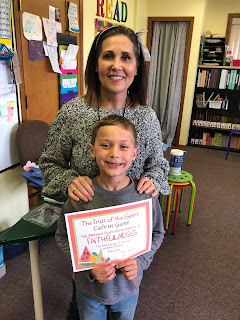 This kid.  Couldn't be more proud. Not only do our boys attend a school that awards kids for their display of the Fruits of the Spirit, but they actually get chosen from their entire class to receive the award. Mrs. Gill chose Calvin for the Fruit of the Spirit of Faithfulness.  She spoke very highly of him at the school assembly and I could tell, made him beam with pride as he walked to the front to receive it. Keep it up Calvin!  Your faith will take you far...
Post a Comment
Read more 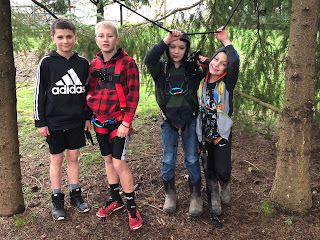 Seriously. One single blink. If the first ten years go by this quickly, he'll be in college before I blink again. Our Sweet William boy.  Although he's still all boy, he's definitely showing signs of growth into a young man.  Every once in awhile I'll look at him and recognize how his features of changed, how his mannerisms are a little different and when he talks, it's evident he understands more.  There's still a lot of growth yet to come, but it sure has been fun watching him. He has and continues to love to build things.  While most kids his age have started forgetting about their lego sets, he frequently visits his lego bins to show us yet another creation he's built.  He was recently excited about a used lego set he purchased with his own $45, especially after finding out it sells for $180 new. The timidness he so easily sunk into when he was younger, is slowly but surely becoming less and less.  There are tidbits of bravery poking through his
Post a Comment
Read more
More posts